The Matsu islands are located in northwest Taiwan, about as close to mainland China as you can get. It’s one of the farthest locations from Taiwan’s center, its sweet potato-shaped main island. In other words, the frontier.

This is where I decided to ring in the new year. This time around, I went by plane from Taipei to the largest of these islands, Nangan. I’m not sure whether it was the weather or pollution, but I looked down on the brown, cloudy, milk tea-like ocean until I arrived an hour later.

Matsu in the winter was far colder than I had imagined. I sipped on high-proof Kaoliang to warm my body. I had come during the off season, so there were hardly any tourists around. The few days I spent there were quiet ones, as if we’d accidentally come to this island all alone.

Looking at a map I picked up at the airport, I realized that about half of the main sights were military installations, like the many air raid shelters and pillboxes that had been opened to the public, underground tunnels, and more. During the second half of the 20th century, the Matsus acted as a military base in the Chinese Civil War, alongside the Kinmen Islands. Being the furthest possible location from Taiwan’s (the Republic of China’s) center also meant that it was its front line. Fujian is so close that you can see it beyond the sea with the naked eye, and artillery once rained down on the island. There’s something sad about military facilities being the island’s primary tourist resource, but that too is the undisputable nature of this outlying island, the result of Taiwan’s history and contemporary tourism demands.

As I cruised around the island on motorcycle, I came across a pillbox below a cliff that had been repurposed as a café. A long hole had been dug from a square camouflaged structure that connected underground. I walked through it until I arrived at a pillbox jutting out into the sea. A small hole had been opened in this mass of concrete that soldiers must have once used to observe and fire upon their enemies. It exists today as a place where you can drink a café latte.

I peeked outside from the small hole in the dark space. Though this window had been made for specific reasons, firing and observation, it may also be a primordial form of the structure as a tool to protect oneself.

Next to the military-related exhibition hall located near the highest point of the island was a facility that an active-duty soldier still uses to observe the ocean. Speaking to him, it seemed that this man who looked to be in his late-30s spent all day there in case of an emergency. He was all alone, but his mission was an important one. The front lines of the front lines. Whatever the case, it seems that some make a life of spending all day looking at the ocean. I imagine that on the other, Chinese side of the sea is a similar soldier facing opposite from him, also spending all day looking at the sea. I can only pray that their jobs never grow any busier than they are now.

Quite a lot of old villages still remain in the island, but their tightly packed ashlar houses aren’t found on Taiwan’s main island. Much of the island is made of white sand granite, its geology actually closer to that of mainland China. While many kinds of rocks are spread across Taiwan’s main island as well, they are mostly found in its mountainous regions, while most of the lower-lying areas where people have flourished were built up with brick structures. You could once see stone structures made by its native people in the mountainous regions, but they’re nearly gone now.

The houses of Matsu, which protect their inhabitants from powerful ocean winds and the cold with their thick walls, have extremely short roof eaves, and small windows dot their stocky walls that are held down by stones so that they don’t blow away. The short pillars of their standing gable walls must be another way to deal with strong winds, but the variation in the shape of the curves at their very top are influenced by Minnan (south Fujianese) architecture, something seen in other parts of Taiwan as well.

These windows dotting the walls seemed smaller the older they were. The smallest window I found among the villages was a twenty-centimeter or so square opening on a warehouse-like shed with a door stuck inside. This simply seemed too small. I didn’t know what meaning a window so tiny could have, but there must have been a reason to have one there. It’s normal on the island to actually not open your windows due to the strong winds and cold temperatures, so maybe these extremely small windows appear as the most simple possible form of window. This would be something shared in common with military facilities: built following the logic of the bare minimum required.

Behind this window was a neat line of somewhat larger ones. Perhaps at some point, it became easier to acquire lintels (stone beams that span the top of an opening). Alternatively, this could have something to do with the development of heating equipment. Whatever the case, the windows of Matsu’s houses seem to be growing larger and larger.

Of course, there are many concrete houses to be found as well. Some are made to look like the stone houses and can’t be differentiated from the older houses at first glance, but they’re given away by the size of their windows and the presence of lintels. The windows naturally get even larger and freer with the concrete houses.

It’s interesting that you can see the full process of these small windows gradually getting larger and more free. It’s as if you’re looking at how the architecture of Matsu’s villages evolved. I doubt curtain walls will become an established part of this island with its strong winds, though.

Continue walking through the villages and you’ll find exposed outdoor infrastructure like air conditioning units, water supply tanks, TV antennas, and more. A big, silver water tank sits there plopped down in the village with enough pipes running to its homes to make it a permanent fixture. External units are attached in front of the small, barely opened holes of the houses, white pipes burrowing inside like living creatures. This sad and hopeless sight is an inseparable part of an old village, and it is always the window, tasked with connected the outside and the inside, that suffers the damage.

I arrived at my inn as the sun was setting. It wasn’t part of a village so much as it was one of a number of homes built along a cliff, apparently a remodeled house. I liked it for its scattered black and yellow stone walls that gave it the feeling of a handmade house. It had been built about a hundred years ago, according to the inn’s master. He continued by telling me about his life as a boy on the island.

“Bombs from China exploded all around here when I was a kid. People I knew even died. Everyone moved to Taiwan because of that, and not many ever returned.”

I can’t even imagine having to leave one’s island out of fear of bombs. Listening to him, though, I had to think that their houses once played the same role as the island’s military facilities. For a long time, the islanders would look out the small windows opened in their sturdy stone houses to see the same sights as the soldier looking at the sea from the top of the island. No, what they saw must have been far worse.

It was now New Year’s Eve. While Chinese New Year is a more important day in Taiwan, New Year’s events are still held all around it. It seemed that even in Matsu, they were holding a small event where a singer had come from somewhere to perform. It was too cold for me, though, so I just watched the broadcast from my inn. The live images from somewhere surely nearby looked like something from a distant country from inside the warm stone home.

The new year then arrived in darkness, the night ocean the only sound I could hear.

(To be continued in Part 2)

Taguma was born in Tokyo in 1992. In 2017 he graduated from Waseda Universityʼs Nakatani Norihito Lab with his masterʼs in architectural history. During his time off from graduate school, he traveled around villages and folk houses in 11 Asian and Middle Eastern countries (his essays about this trip are serialized on the Window Research Institute website as “Travelling Asia through a Window“). In 2017, he began working under Huang Sheng-Yuan at Fieldoffice Architects in Yilan County, Taiwan. In 2018 he was accepted to the UNION Foundation for Ergodesign Cultureʼs overseas training program, and in 2019 he was accepted to the artist overseas training program promoted by the Agency for Cultural Affairs. He is based in Yilan, where it rains for the majority of the year, from which he designs various public buildings such as parks, cultural facilities, parking structures, bus terminals, and more. 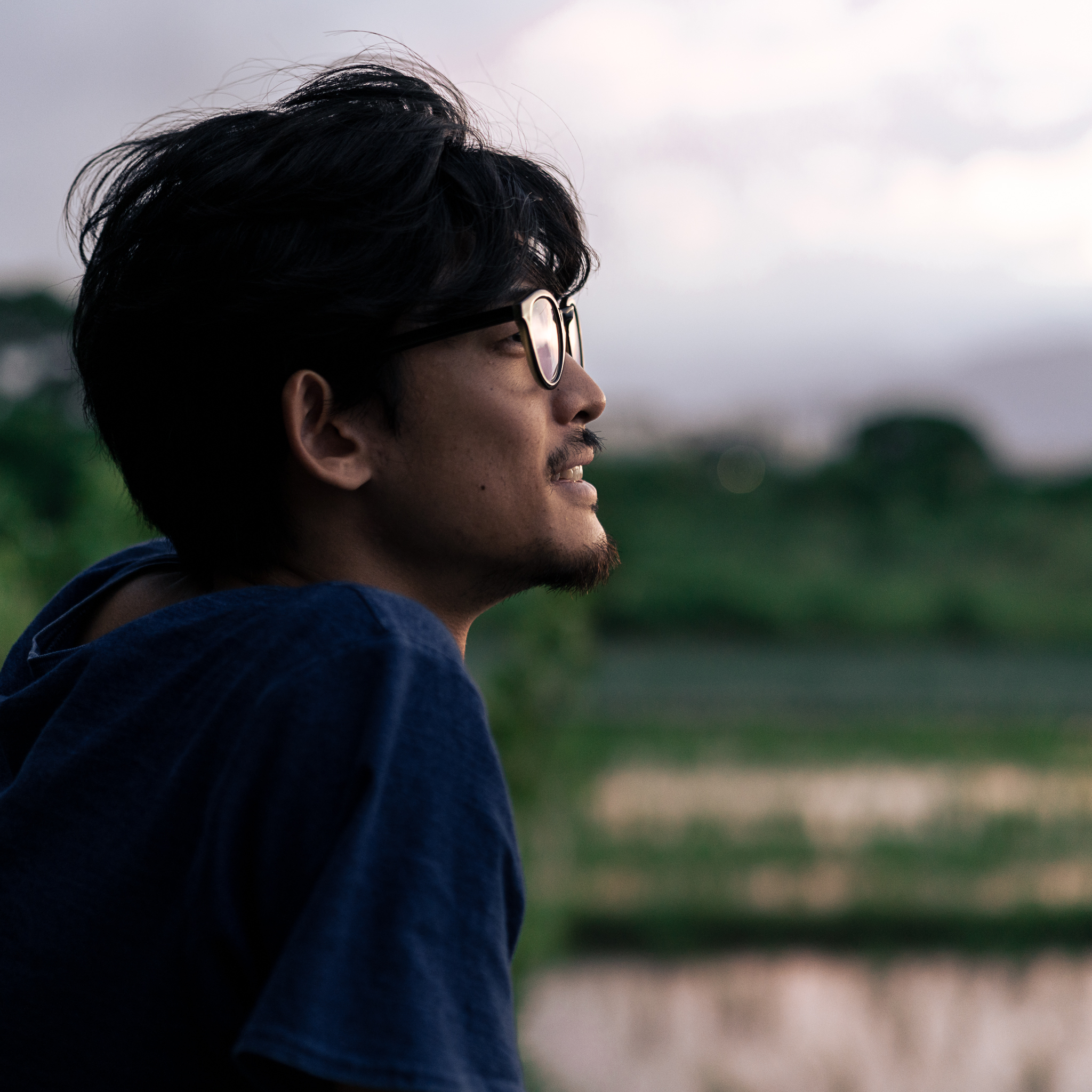