Directing light into a room and letting in air are the major roles for window to play in making a living environment comfortable. Yet, there is also a type of window whose main purpose is to expose the interior to the exterior, such as the windows on storefronts. However, most people usually conceive of windows as primarily used for showcasing the scenery outside. Windows may prod one to ask questions like, “What is beyond the window? What is beyond the view that the window offers?” One sees the outside “through” the window, even if the “Madosoto” (in Japanese, “mado” means “window” and “soto” means “outside”) is not a grand natural landscape, a magnificent garden, or a dynamic urban landscape.

A house created together with residents, feeing a sense of all four seasonsThis house is located in a residential area in Hayama, Kanagawa, Japan. It is a concrete house that, at first glance, looks small but feels heavy, standing on a slightly tucked away and high site. This house is called the MISAWA house, designed by YOSIZAKA Takamasa and Atelier U.
The clients were MISAWA Itaru and his wife, Machiko. Machiko’s father was OMURA Yuji, who taught French and Latin at Athenee Francais (a language school) and Waseda University, both in Tokyo. OMURA had a close family relationship with the YOSIZAKA family. On their way home from the sea of Hayama, MISAWA discovered this land and bought it impulsively, leaving the whole house to YOSIZAKA without any conditions, such as budgetary requirements or design orders.

YOSIZAKA, who had been familiar with the Alps since he was a boy and had been an active mountaineer for many years, was very pleased with the land, with its green mountains and valleys to the south, and Mt. Fuji to the west. One question that is important to explore is, how did he harmonize the houseʼs design with nature? At first, YOSIZAKA tried to create a dwelling underground. However, he abandoned the idea because the ground was too hard to excavate. Instead, he enacted the current plan, in which three separate buildings, each with its own unique shape, were arranged and connected by terraces. One of the buildings, which features a cylindrical shape, is in the southwest (the first floor is a warehouse, and the second floor is a study) and is accessible by a ladder, as if going underground, which may be a trace of that original idea.

This was an ingenious design, replete with truly unique attributes, not only in terms of design but also in how it was made. The members of Atelier U, which was led by YOSIZAKA, lived at the site, using sleeping bags at night and working hard every day in its design and construction. When the client finally moved in, only one room had been completed. Nonetheless, the MISAWA family lived in the house while construction was ongoing, and they also participated in the construction by laying bricks. The busy time of constructing the house by day and drinking by night lasted, astonishingly, for ten years. Looking back on those days fondly, Machikoʼs smiling face showed that both the clients and YOSIZAKA, along with the members of Atelier U, greatly enjoyed building the house together. YOSIZAKA even wrote, “We often have a long period of conversations with the client, using drawings or models, during the passage of all four seasons in Japan. When that happens, a client is likely to be quite satisfied. […] Itʼs because the client and the designer create the architecture together as one.” While soaking in Hayamaʼs natural environment and experiencing all four of its seasons, the architects and the clients talked and worked together, shared food among themselves, and slept together, resulting the fine creation of this architectural masterpiece, which we call the MISAWA house.

Walls that curve in two directionsIn addition to a style that features a separate house, the other major feature of the MISAWA house is its shape. All three buildings have curved walls that meet the terrace side of the building. Regarding the cylindrical building to the southwest, the walls are curved accordingly (but there is no opening on the terrace side). However, the two-story southeast building, with childrenʼs rooms on the first floor and a living room on the second floor, has a curved wall on the west side. The wall corresponds to the hypotenuse of the trapezoid in the plan. As for the wall of the northern building, which has guest rooms on the first floor, dining rooms on the second, and bedrooms on the third, it has a gentle arc, as if the building were bowing to the sectional view. Both horizontally and vertically, the buildings seem to encompass the terraced space on the second floor. The question thus comes to the fore: Why are these two walls curved? YOSIZAKA described these two walls thus: “The two curved walls, horizontal and vertical, are the boundary that cuts through the air.” Although it is difficult to grasp the true meaning of YOSIZAKAʼs words, this is a typical expression for him.

On the other hand, he frankly expressed his feelings about the fittings and furniture of the house, saying, “Itʼs fun to think of twists in architecture. Mix the necessary and sufficient conditions with the spirit of mischievousness and a building becomes distinctive […] I plan to create every piece of furniture to make this house feel at home.”

For example, consider the bedroom window on the third floor of the north building. Located on the south wall, which appears to be bowing, the upper window is fixed and acts as a half-mirror with 30 percent reflectivity. The lower is an openable window for ventilation with a large luggage draw latch as a clasp. The thick lauan crosspieces surrounding each pane of glass were painted a deep green, like the trees on the mountain in front of them. True to YOSIZAKAʼs words, one can feel the gentle touch of the wood and the warmth and loveliness of the handmade window. When I opened the lower ventilation window, a fresh outside wind blew into the room, bringing cherry blossom petals in from the mountains in springtime.

This horizontal window cuts beautifully through the cedar forest on the mountain slope in front of you, but is angled slightly downward along the wall so the view ahead is nonlinear. To me, this explained why the walls curve. YOSIZAKA intended to take a birdʼs-eye view of the mountainous slopes and valleys in front of him and make the scenery appear both wide and deep. As a result, the south wall of the north building was shaped like a bow bending toward the terrace and valley. The half-mirror located on the upper portion of the window may have been designed to illuminate the bottom of the valley with sunlight. Similarly, the western concave wall of the southeast building is likely to offer a wider opening for the distant view of Mt. Fuji. In other words, the decisive factor regarding the MISAWA houseʼs curved wall was “Madosoto”; in fact, it could be said that it was the nature of the “mountain” that YOSIZAKA passionately loved throughout his life.

While one may argue this could be an exaggeration, on the other hand, it is natural that the landscape of the site would define architectural design. For architectural designs, it is common to plan the floor of a living room or a bedroom with Madosoto in mind, as well as to determine the location and size of a window. However, it seems to be YOSIZAKAʼs signature, to reflect the curvature of a wall. “Madosoto” is a Japanese term that denotes a physical and realistic view of a buildingʼs interior when one looks out through the window. The meaning of “Madosoto” also includes emotional connotations, such as yearning to be in a protected, enclosed space and seeing the outside world through a window, contrasting the natural environment against man-made architecture. YOSIZAKA, who loved and faced each of these conflicting elements even though they are indispensable to human beings, drafted his architecture style as if he had been strongly influenced by his adoration for nature and human beings. I understand his architecture in this way.

A window that opens to the outsideThe MISAWA houseʼs “Madosoto” is the nature of Hayamaʼs rich, mountainous landscape. However, the windows serve an addition function.
On the day we visited the house, heavy rain and strong, storm-like winds incessantly hammered us from late night to early morning due to a heavily developed frontal depression in the region. Even when it was time to visit the house, the storm was still raging and, honestly, it seemed impossible to get there safely. However, as I made my way to the house from Tokyo, the storm stopped suddenly; it was incredible to witness. It was still windy, but as if for our own convenience, the downpour stopped as if it had washed out from the world of “Madosoto.” In its stead, a cloudless, blue sky prevailed.
After viewing the third-floor bedroom, I went down to the second floor and sat on a chair on the terrace. Under a remarkably clear sky after the storm, I could now see clearly the scenery that had attracted YOSIZAKA without passing through the window, and I felt it was beautiful again. The owner of the house, Machiko, who was sitting across from me, told me something interesting: “You can sit with your back to the valley like this and still enjoy the view.” At the suggestion, I sat down next to Machiko, who turned my back to the southern mountain, and looked up at the third-floor window of the bowing wall. The mirrors of the upper fixed windows reflected the light strongly, clearly showing the blue sky, the mountains, and the valleys behind us.

What one sees through the window from the inside is not the only “Madosoto.” This was the ultimate window for showing us the view from both sides of the window, by transmission inside and by reflecting the outside terrace.

YOSIZAKA Takamasa (1917–1980) YOSIZAKA was born in Tokyo and spent his childhood in Switzerland. He graduated from the Department of Architecture, Faculty of Science and Engineering, at Waseda University in Tokyo in 1941. YOSIZAKA studied under Wajiro KON and researched private houses and farmhouses. He also worked at Le Corbusier’s atelier in Paris, starting in 1950. After returning to Japan, he established the Atelier YOSIZAKA Takamasa in 1954 (renamed Atelier U). He taught at Waseda University and shaped many architects; he was an excellent architecture professor. He was an active mountaineer and explorer, and he also led Waseda University’s Alaska-McKinley Expedition in 1960.
Photo courtesy of Yuko Saito. 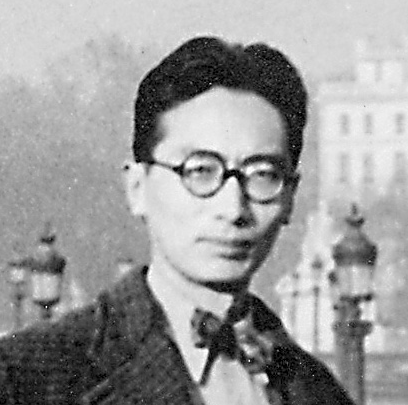 TOP / Series / Madosoto: Outside Scenery / Takamasa Yosizaka: A Window Looking Out on the Slope of a Mountain, For One to View the Scenery Below